An army of warrior kids vows to vanquish a legion of evil vegetables in the brand new TV advert for ITV and Veg Power’s highly effective Eat Them To Defeat Them campaign, created by adam&eveDDB, supported by a multi-million media alliance between ITV, STV, Channel 4 and Sky, and funded by 10 food and retail brands.

The cackles, grunts and groans of the evil attacking vegetables have been hilariously voiced by top celebrities including Dame Emma Thompson, Amanda Holden, Jamie Oliver, Stephen Mulhern, Giovanna Fletcher and Ranvir Singh in a bid to build on previous successes in getting children to eat more vegetables. One in three children leaves primary school overweight or obese, and eating vegetables is core to a healthy diet.

This award-winning campaign is proof that it’s possible to change not just kids’ attitudes but their behaviours around eating vegetables. We are delighted to be driving this huge alliance around Eat Them to Defeat Them for a third year, together getting literally millions more portions of vegetables into kids’ tummies. Susie Braun, Head of Social Purpose at ITV

This comes with a new report from the Food Foundation showing almost a third (29%) of children aged 5 to 10 years old eat less than one portion of vegetables a day.

Called ‘Prepare for Battle’, the campaign carries on the successful strategy of positioning the evil vegetables as an enemy where the  children become the heroes and have to Eat Them To Defeat Them.  This counter-intuitive approach has already proven to be very effective with kids, parents and schools all confirming it actually gets kids to eat more vegetables. 81% of school staff stated that the campaign was more popular than other healthy eating initiatives. 76% of kids in schools said the campaign made eating veg more fun. 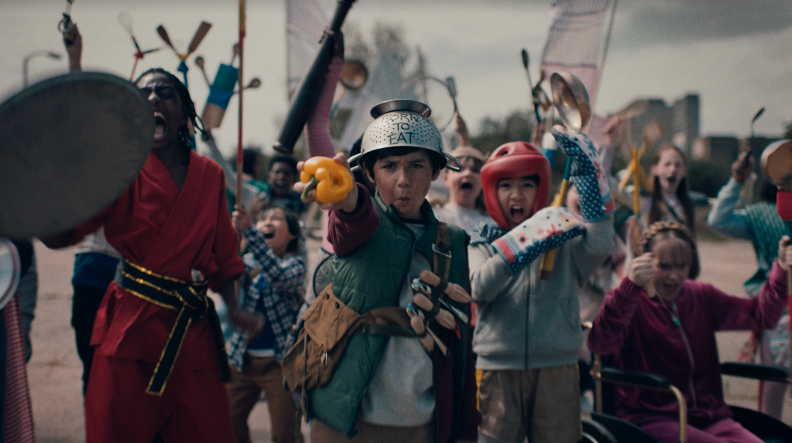 We are delighted that Eat Them To Defeat Them has returned for its third year and is set to reach even more children across the UK. As our mission is to get the UK eating more veg, engaging with children on this topic is crucial as not only will it improve their health but encourage life-long eating habits. Baroness Rosie Boycott, Chair of Veg Power Board

Since the campaign debuted in January 2019, it has led to sales of over 517 million additional children’s portions of vegetables worth £63m.

The new hero 60-second spot starts with the news that evil veg are back. We then see kids from across Britain pledging to make their foes ‘wish they were never grown’. In a montage, the kids undertake intense training using everyday kitchen utensils, eventually squaring up against the veg on the battlefield. The first shot is fired, in the form of a fork piercing a terrifying tomato, before all hell breaks loose. As the army charges forth, one of the warriors turns to camera, demanding of her fellow children: “Will you just sit there? Or are you with us?”

The EAT THEM TO DEFEAT THEM campaign is one that the whole school community look forward to every year. The impressive resources are really engaging and provide staff with excellent ideas to support learning in the classroom. It is wonderful to see how enthused the children are and how excited they get about the great message of eating more vegetables. Jason O’Rourke, Head of Washingborough Academy

‘Prepare for Battle’ launches on Saturday 29 May including in ITV’s new show, The Masked Dancer. The Masked Dancer includes a Beetroot character, inspired by the campaign. The new Eat Them To Defeat them ads will also run in major shows on Sky, Channel 4 and STV, and feature in editorial including Martin and Roman’s Weekend Best, James Martin’s Saturday Morning, Alan Titchmarsh’s Spring into Summer, and ITV Daytime.

Verica Djurdjevic, Chief Revenue Officer at Channel 4 said: “Positively changing kids’ eating habits through a bold TV wide campaign such as Eat Them to Defeat Them demonstrates the real social impact broadcaster collaboration is delivering. We’re delighted to play a role in building upon this amazing momentum and continuing to inspire young people.”

The campaign is set to reach 5.2 million households with children, thanks to donated media from ITV, Channel 4 and Sky, as part of their £10 million commitment to promoting healthy lifestyles for children.

Tim Pearson, Managing Director, at Sky Media, says: “Encouraging kids to eat healthily goes hand in hand with Sky’s long standing commitment to grassroots sport and helping young people get active. We’re proud to offer the power of TV advertising to support this campaign and help kids lead healthier lives. We can’t wait to see the impact of this partnership grow as it returns for a third year.” 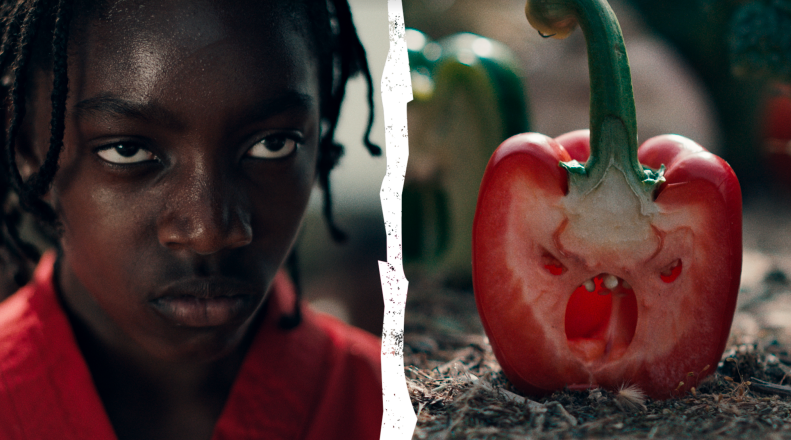 This campaign is important, increasingly urgent, and it works. It’s good to see an ever-growing coalition of partners getting involved and to know that together we are helping to get more veg on more forks and in more mouths. Mat Goff, Joint Chief Executive Officer at adam&eveDDB

This year the campaign is rolling out into 1,900 primary schools with veg tasting sessions, posters, teaching aids and games, and into the homes as 500,000 children will be given a vegetable reward chart and sticker pack, alongside a puzzle book co-created and funded by Public Health England’s Change4Life campaign.

Once again television proves to be the best mass medium for persuasion. After the success of the first spot for ‘Eat them to Defeat Them’ we’ve come back with a follow up, imploring children to join the battle against the evil veg, in an irreverent, funny and compelling commercial. Veg beware! John Hegarty, Veg Power Board

A new report, ‘Veg Facts 2021’, being released by The Food Foundation and Peas Please Partnership,  reveals that almost a third of children between 5-10 years old eat less than one portion of veg a day.     The Eat Them To Defeat Them campaign shows how advertising can be used to inspire kids to eat a healthier diet. The situation does not improve with teenagers with only 6% of teenagers aged 11-16 years old currently eating enough veg to hit the recommendations in the Government’s Eatwell Guide.

Research conducted by YouGov, commissioned by ITV and Veg Power for the campaign found that 35% of parents worried about their children’s diets during the pandemic.

It’s time to defeat those dastardly veg – and eat them again!! It’s been great to be part of the Veg Power team and watch this funny, irreverent and counter-intuitive ad come together, following the success of the first Eat Them to Defeat Them campaign. We know kids are enjoying these spots, and relating to them, and even more importantly, we know many of the kids who are seeing these ads are indeed eating more veg. Long may it continue. Hugh Fearnley Whittingstall, writer and chef